Look at the me. That's what the world is turning me into. Chris fuckin' Crocker.

Everywhere I turn, on the Internet, on TV, on the radio, there's this constant shark-drool hum about Tiger Woods. A fire hydrant. His wife. A golf club. A shattered window. A woman in New York. Scandal! Deception! Dodging the police! Ruining his career!!!!

My collective response to it? Stop it, people. Just stop.

As best I can tell, over the course of his billion-dollar career, this is Tiger Woods' virgin step into anything other than a lily-white track record. Seriously, just try and imagine how impossible it must be to go 13 years as arguably the most famous and best-known athlete in the world -- yes, for a while he trailed Michael Jordan, but no longer -- with press and photographers constantly following your every step, your every breath, without once doing anything untoward.

We get to sit in the privacy of our own homes and amuse ourselves with little platitudes like, "Character is what you do when no one is watching." But guess what? When you're Tiger Woods, someone is always watching. He doesn't need to be threatened by the thought of Jesus or angels or his father looking over his shoulder, because dudes with telephoto lenses and hypersensitive microphones are tracking him 24/7. 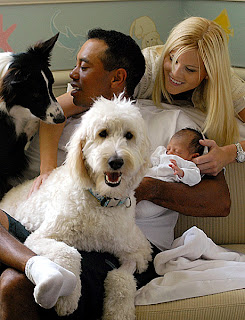 So, with the exception of being a little pouty and potty-mouthed on a golf course, this "accident" is the very first moment Tiger has proven himself human. (Well, he proved capable of impregnating his wife... but even the Visitors can do that, so I'm not sure having semen counts.)

And you can tell by our reaction that most of us have been eagerly and hungrily waiting for this moment. He's human, and by God, for that, he's gonna pay! Make him suffer! Let's revel in his imperfections!!

Please don't mistake my anger for fandom. While I'm in true awe of Tiger's golf skills, I don't idolize him or follow him or watch copious amounts of golf tournaments just because he's in them. Truthfully, I'm a bigger fan of Mickelson, and on those rare occasions when I watch golf, I get annoyed that Tiger's the focus of every other shot even when he's mired in 19th place.

While I'm not particularly in favor of politicians getting this treatment anymore than celebrities, at least politicians waste time shouting moralistic platitudes, practically begging to be caught in hypocritical moments. We're still guilty of being the drooling crowd at a gladiator match, watching the tigers maul their armored prey, but at least we can know they kinda asked for it. But celebrities and athletes? They just wanted to play their games, man. Everything beyond that is stuff we put on them that they never asked for.

In truth, we have no way of knowing what happened between this attractive and wealthy couple in the middle of the night. The only thing that's remotely fair to speculate, IMO, is that if -- IF -- she attacked him with that club, the reason Tiger is being so tight-lipped is to protect her from Florida's uber-strict spousal abuse laws. 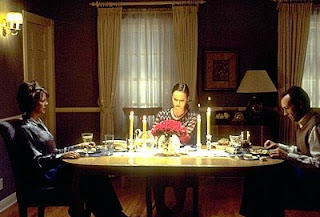 If -- IF -- they were fighting, does the fight really have to be about his, um, "Driver" and another woman? I know plenty of couples who, especially in the dark of night after some drinkin', get in serious plate-throwing, wall-punching arguments about the most random nonsense on the planet. Watch "American Beauty" and trust that the plate-throwing dinner conversation happens all the time, all over this blessed country of ours. It doesn't just happen in trailer parks.

UPDATE: As of Tuesday night, Police had closed the case. Tiger will pay a $167 fine. The neighbor says Mrs. Tiger came to them asking them to call 911, which is precisely what someone would do after attempting to shove a pitching wedge into her husband's skull, right? The odds are pretty good that all of these rumors, all of this speculation, will either prove to have no merit, or will simply never be proven, like a fart in a phone booth of unbathed clowns. Yet no one anywhere in the media will apologize for gleefully attempting to drag the dude's name through the mud for the sole purpose of attracting the Almighty Dollar. They were just "following their journalistic obligations."

Yeah right. Sleep tight, you sharks and leeches. Rest up for your next celebrity. And please God don't go getting a conscience or anything. Or worse yet, don't go start reporting actual important shit like stuff about war and famine and hunger. That stuff makes Matt Lauer frown, which starts my day on the wrong foot.

The Most Powerful Telescope in the World sent us their album, and "Buy Into It" is a solid example of the quality you can expect from their album, The Moonlight's Fair Tonight. Yeah, he kinda sounds like J. Mascis without the wild and wailin' guitar. As for The Weakerthans, anyone who ever felt like a nerd has no choice but to love this band.
By: Billy at 12:40 AM

All I can say is that our so-called media is reason number 112 for me not missing my television. Is it true that Larry King reported that Tiger was on his way to crash a state dinner with the balloon boy family when this happened?

I'm with Tockstar on this one. I have 12 channels I only watch for The Office and Seinfeld reruns. I find a way to see Curb Your Enthusiasm on other people's HBO. I get my news from Newsweek and the New York Times, not TV. Other than that, I honestly don't give a shit about 99% of what passes for news or entertainment, and my behavior and media consumption reflect that. So don't blame me, Bob. I ain't part of this "us"...except for being part of the country that is going down the tubes and getting screwed over while we're distracted by the old bread and circuses.

I don't disagree with you, Tock or Trout. We folks at this school have no need of television for our various gossipings and speculations.

Bob, I'm not anti-gossip (even if I would be a better person could I avoid enjoying it so much). But there's a tremendous difference, to me, between discussing people you actually know and people you don't know yet despise or like merely for symbolic reasons.

Talking about friends, neighbors, coworkers is a natural (if imperfect) part of any healthy social network. Talking about Tiger's dick (or Branjelina, or Paris Hilton, or Charles Barkley, etc.), on the other hand, is not.

"Foul deeds will rise,
Though all the earth o'erwhelm them
To men's eyes."

"A man is only as faithful as his options." -- Chris Rock (via Michael Wilbon)

Bob -- For the record, it would seem that Tiger is indeed guilty of infidelity, but with an altogether different woman than the one mentioned in earlier reports. Does that detail matter? Does anyone care about being accurate, or is the game of speculation simply too irresistible?

And we still don't know if this directly related to his car accident, nor do we know what happened with his wife's "rescue" attempt.

Is that correct, or have I missed yet another update in my attempt to not care?